On 19 April 1610, Johannes Kepler wrote an open letter to Galileo Galilei, musing on possible future voyages that would allow explorers — human explorers — to see what Galileo’s telescope had shown.  He mused that some day inventors might “provide ship or sails adapted to the heavenly breezes, and there will be some who will not fear even that void.” Kepler called on Galileo to join him in preparing the way for those so0n to be travellers, and create a new science to light their way: astronomy.

It was almost exactly 351 years before Kepler’s speculations were realized — on 12 April 1961 the Soviet Union launched cosmonaut Yuri Gagarin into space. In a flight that lasted only 108 minutes, Gagarin orbited the Earth in a capsule bearing the callsign Kedr (“Cedar”), and initiated The Space Age.

Kepler’s poetic  words are a testament to our visceral desire to know the Cosmos. Gagarin was perhaps no less poetic when, in the middle of the launch, he belted out an exclamation of joy born from the same deep well of emotional longing — Gagarin’s hearty “Poyekhali!” (“Let’s go!”) ushered in a new era in the history of our species — the beginning of our quest to walk among the stars.

The Cosmos is vast, and nothing makes that point more abundantly clear than contemplating long journeys by humans into space. Trying to protect and sustain our fragile bodies for the duration of a long space voyage brings into sharp focus a single, glaring fact: we are designed for Earth, not for the void, not for alien landscapes, not for far-off icy moons. Despite all the tantalizing things we can see, it seems Nature never intended us to stray far from the small Blue Marble of Earth. We shouldn’t feel bad about that; it is also true for starfish, and seagulls, and housecats, and pine trees.

But humans are a particularly stubborn and imaginative species. We could easily abandon the dream of travelling beyond Earth, but instead we designed and built machines to make the voyage for us. Our knowledge of the Cosmos today is largely populated by images collected by semi-intelligent robots built to be our eyes and ears. They have travelled where we cannot, and faithfully returned images which are arguably the most artistic, the most beautiful, the most stunning, the most confusing, the most awe-inspiring, and the most thought-provoking things humans have ever seen. 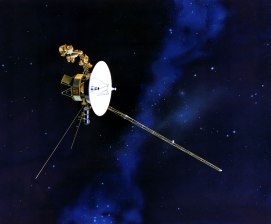 For every space probe we have thrown into space, for every world they have visited, for every picture they have snapped, there is a tale to tell. All of them unique, all of them stirring. Let’s revisit the tale of one spacecraft that has been outbound now for almost 38 years; a spacecraft called Voyager 1.

Launched on a bright September morning in 1977, Voyager set sail for the outer solar system. Its mission was to visit Jupiter and Saturn and tell us what it discovered, and then to begin a long slow march into space, searching for the edge of the solar system. Voyager returned tens of thousands of pictures during its mission, but I find two particularly compelling.

In February of 1979, as Voyager was speeding toward its encounter with Jupiter, it snapped this photo: the most exquisite and detailed image of the iconic Great Red Spot ever taken. Voyager showed us the magnificent swirl and drift of the clouds on Jupiter, bands of colorful and dynamic gas driven by 600 kilometer per hour winds around the boundaries of a 400 year old hurricane twice the size of the Earth. This is a storm that,  before we turned our eyes to the skies, our species had never encountered nor imagined. But Voyager painted it for us, indelibly etching it into our memory, with a casual snap of a camera. 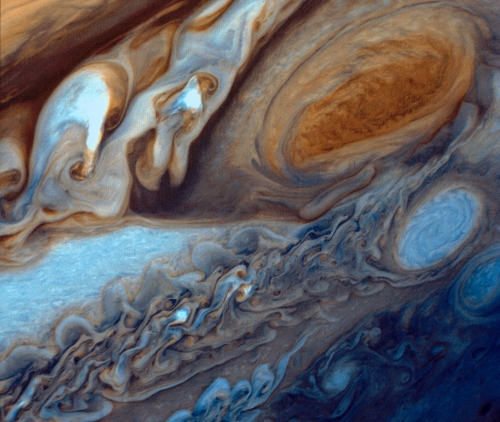 Voyager I view of the Great Red Spot as it approached Jupiter in 1979 [Image: NASA].

I like this picture because, to the unknowing eye, one might assume that it is a painting, made by an Earthbound artist, trying to capture or evoke some deep feeling or emotion about the human condition. But this was not painted by human hands. This is Nature painting, using a planet as its canvas.

After sailing past Jupiter, Voyager sped on to Saturn, where it took even more pictures and uncovered more mysteries, painting new pictures of a gentle giant bejeweled by a ring of ice. The encounter with Saturn ultimately propelled it on a course to carry it out of our solar system and into interstellar space. On Valentine’s Day in 1990, right after Voyager crossed the orbit of Neptune, we commanded it to turn its cameras inward and take one last series of pictures before they were turned off. In a sequence of 60 pictures, Voyager snapped a family portrait — a stitched panorama that contains every planet of the Solar System, the family of the Sun. This is the frame that contains the Earth. Like the Blue Marble, it is one of the most iconic images of Earth ever taken, dubbed The Pale Blue Dot.

The Pale Blue Dot — the frame from the Voyager family portrait that includes the Earth [Image: NASA].

More than any other picture, this captures how small and tiny the Earth is. Voyager wasn’t even out of the solar system when it took this picture. In a Cosmic sense it was still close to home, and already the Earth was nothing bigger than a small fleck of light that if we weren’t looking for it, we may not have noticed.  Everything you’ve ever known is inside that dot.

But Voyager also carries a sign of our optimism about belonging to a much larger Cosmos. Bolted onto its side, is a Golden Record. It is a phonograph record, a message to anyone who might stumble on Voyager in the distant future, long after its electronics have died and it becomes little more than a fleck of space junk drifting aimlessly through the galaxy. Should someone find Voyager and its Golden Record,  they would find information about the record, and instructions for playing it. Included in those instructions is a map of the galaxy, pointing back to Voyager’s point of origin. On the reverse, etched in golden grooves that will survive a million year journey into the void, is a collection of data about us, and about our world. It includes greetings recorded in 55 languages of Earth. It includes 115 images from the planet Earth from the time when Voyager set sail into the Cosmos. It includes 90 minutes of music from our civilization. And engraved on the inner edge is a single sentence, in English, that reads “To the makers of music, all worlds, all times.”

This is not the kind of thing  you make and throw out into the vast sea of the Cosmos if you are hiding from the immensity of the Universe. Voyager will outlast every person alive on Earth today. It will outlast every one of us, every person who selected music or pictures to be included on this Golden Record. It will outlast our entire civilization. But some part of us can imagine — hopes — that Voyager will survive and be found, and tell the tale of who we are. Perhaps those listeners will be unimaginable alien intelligences; perhaps they will be our descendants who have utterly forgotten us and our civilization.

Voyager and all the other robotic spacecraft we have built are magnificent creations. We can look at them and be amazed that they have gone so far and seen so much. The very existence of pictures like those I have shown you, and literally millions of others like them, should convince you that we can do anything. We can solve any problem we face, we can uncover any mystery the Cosmos puts before us.

Which leads to one last, important thought. Let’s go back to where we started, thinking about the 10 billion billion grains of sand on Earth, and the 10,000 billion billion stars in the Cosmos.

In a very real way, you are atoms the Universe has assembled to look at itself. You are atoms that have been organized to look out into the Cosmos and ask the question, “What’s the deal with all those other atoms?”

You are the Cosmos made manifest.

You are a way the Cosmos has organized itself to ask those questions that humans have always asked. Where did we come from? Where are we going? Why are we here? And what is our role to play in the enormous universe all around us?

It’s okay to feel small. We are small, so we should be humble. We don’t know all there is to know about the Universe.  But be noble, because you are made of the stars. You and I are members of the only species we know that is capable of asking the questions we ask, of figuring things out and asking new questions. It’s very empowering and an important part of who we are. It’s something I think we tend to forget; we get caught up in our problems and in our concerns every single day. But just like artists, scientists, and clergy, we are all true seekers. We’re just trying to understand what our place in the Cosmos really is.

— (1) I have been unable to indeed verify that this is a proverb from Serbian culture! I would love it if someone actually knew where this came from!

This post is the last in a series of three that capture the discussion in a talk I had the great pleasure of giving for Illinois Humanities as part of their Elective Studies series, a program that seeks to mix artists with people far outside their normal community, to stimulate discussion and new ideas for everyone.  The first post can be found here:  http://wp.me/p19G0g-xB

Illinois Humanities taped this talk and you can watch it online;  many thanks to David Thomas for doing the videography!