A Thin Rain of Black Holes

As a scientist, I am used to being humbled by Nature. Consider how difficult it is for us to replicate physical situations that the Universe creates and maintains almost effortlessly. For instance, in the central African nation of Gabon, in the hills near the eastern border, there are vast deposits of Uranium ore in an area known as Oklo. Analysis of the Oklo ore has shown that it has been processed via nuclear fission roughly 2 billion years ago. All on it’s own, Nature created and ran a nuclear reactor. 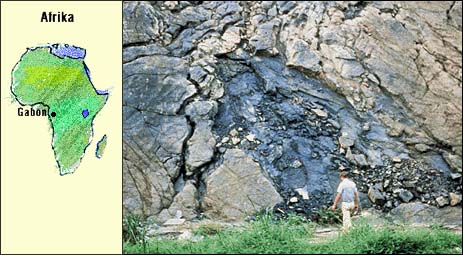 The Oklo natural reactors are found in exposed ore deposits in central Africa. Note the person for scale!

Human beings didn’t even know of the existence of nuclear fission until 1938 when Otto Hahn and Fritz Strassman first detected it in the laboratory; it wasn’t understood until the following year when Lise Meitner explained what was going on! It would take a further 4 years and a huge team of scientists and engineers, supervised by Enrico Fermi, to create the first nuclear fission reactor under the football field at the University of Chicago. On 2 December 1942, “Chicago-Pile 1” became active, finally replicating what the Universe had figured out 2 billion years before.

(L) Strassman, Meitner and Hahn in 1956, at the dedication of the Max Planck Institute. (R) The Hahn-Meitner-Strassman experimental setup that first detected nuclear fission. Note it fits on a tabletop!

Today, our experimental efforts in science have continued to grow, continued to allow us to peer into Nature’s great mysteries. One of the most prominent efforts is the construction of the Large Hadron Collider (LHC) outside of Geneva, on the border of France and Switzerland.  All told, more than 10,000 scientists and engineers from 100 countries contributed to the design, construction, and operation of the LHC.  It is the most powerful particle-collider in the world, smashing together hadrons (particles that are made up of quarks, bound together by the strong force).

An aerial view of the area around Geneva, with the location of the LHC indicated; the tunnel is 27 kilometers in circumference. Center left is Lake Geneva, the background are the Swiss Alps.

The LHC is an enormous machine. The ring is 27 kilometers in circumference, and the major experiments that watch the collisions of sub-atomic particles are bigger than buildings — gigantic, complex machines designed to watch what Nature does on the tiniest scales, which we have only begun to understand over the past 100 years.

The ATLAS experiment, along the beamline of the LHC. It is difficult to comprehend exactly how huge these experiments are, but note the person in front of the experiment, lower center!

The collision energies in the LHC are so high that the protons we smash together break apart into their constituent bits: quarks, gluons, and a lot of energy. At its highest energies — as physicists say, “14 TeV” or “14 Tera-electron-Volts” — the protons we are smashing together will only be travelling about 2.7 meters per second slower than light. What does that mean? Imagine a race to the Moon, between a laser beam and a proton ejected from the LHC. The laser beam would reach the Moon in 1.282 217 0463 seconds, but the protons would only be 11.3 meters behind, arriving at 1.282 217 0578 seconds after the race started. They are moving incredibly fast, which is why they blast themselves to smithereens when they collide.

The post collision mess is a hot writhing, seething mass of energy and fundamental particles that we think is very similar to the conditions just after the Big Bang. At some point in our planning for the LHC, and as we were imagining this hot burst of quark-gluon plasma, someone asked a very interesting question.  Aren’t the collisions strong enough that all of the energy could concentrate mass and energy down to a microscopic point, creating a microscopic black hole? After all, that’s what we expect to happen after the Big Bang — we call them “primordial black holes.”

And then what you’re saying sinks in. We can MAKE black holes? What could happen? Could they sink to the core of the Earth and slowly consume the Earth? If that happened, is there anything we could do about it? This is an idea that has been explored in science fiction before, notably by my astrophysics colleague, J. Craig Wheeler, in his 1986 novel, The Krone Experiment. But what about the case of the Large Hadron Collider? Should we be worried?

There are two very simple reasons why the answer should be “No.”  First and foremost, the protons are travelling at enormous speeds, 99.999 999 1% the speed of light, and the post collision detritus will be travelling at similarly high speeds, propelled by the enormous release of energy in the collision.  Anything travelling at 11.2 kilometers per second or faster can escape the gravitational pull of the Earth.  How fast is 11.2 kilometers per second compared to lightspeed?  That is 0.0037% the speed of light. Any microscopic black holes created by the LHC will easily be travelling so fast that the Earth’s gravity could not possibly keep them stuck here.

Second is this: Nature is far better at making particle accelerators than we are. The LHC energies are paltry compared to the energetic particles that the Cosmos is bombarding the Earth with every single minute of every single day.

The Earth is constantly under the drizzle of a thin cosmic rain (that turn of phrase is the title of an excellent book by Michael Friedlander) of particles from outer space, called “cosmic rays.” These particles come from all over — the vast majority are from the Sun, but others come from highly magnetized stars, or from supernovae, or from shock fronts in vast clouds of interstellar gas and plasma, or from active galactic nuclei, or from black holes. They are constantly bombarding the planet in vast numbers; we like to tell people that TWO cosmic rays go right through your head, every second. 🙂 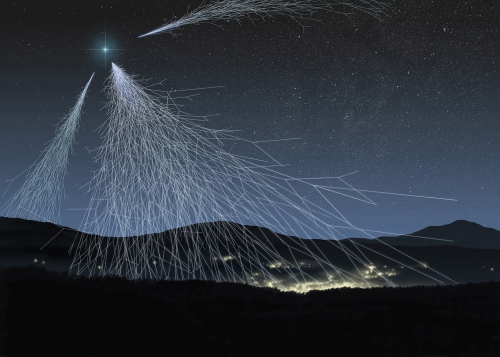 Cosmic rays constantly bombard the Earth. Very often they collide with particles in the Earth’s atmosphere, creating MORE particles (just like collisions in the LHC) when then shower down to Earth.

Like the particles in the LHC, every cosmic ray that hits the earth has an energy, sometimes a very large energy. Imagine grabbing some masking tape and marking out a square on the floor next to you, 1 meter by 1 meter. About 1 time per hour, every hour, a cosmic ray with the same energy as an LHC collision passes through your square.  And not just for your square — for EVERY 1 meter by 1 meter square you could make on the surface of the Earth! In the 15 minutes it takes you to read this article, roughly 10 such events will happen right in your living room. In one year, across the surface of the entire Earth, there are about 4 billion billion such events (4 x 1018). 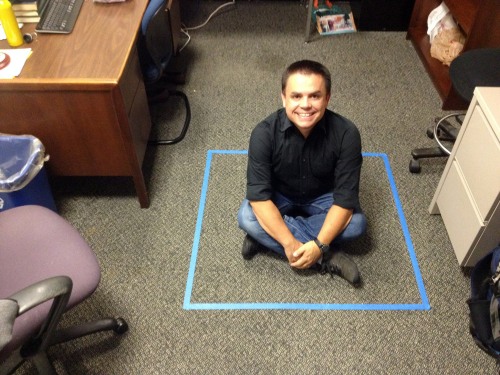 When astronomers talk about cosmic rays, they often think about something called FLUX — how many particles go through a known area in a known time. The cosmic ray flux at LHC energies is about 1 particle in a square meter (the blue square in this image) every hour.

And this has been going on for the entire 4.5 billion year history of the solar system!

Because of this, most scientists aren’t worried by the idea that the LHC could make black holes or transform the quantum state of the Universe, because Nature is already doing its best to do the same thing, and doing it at energies we could only imagine in our wildest experimental dreams.

This post is based on a short “Expert Show” talk I gave at the iO Improv Theatre in Chicago; I talked for about 10 minutes about the LHC and black holes, and then the improv troop took over. 🙂