not everyone grows up to be an astronaut

As the space shuttle Atlantis landed a few days ago, it marked the completion of the final mission of the program. Depending on how you think and what you read, this is either a sure sign of the collapse of America, or the best innovation that NASA has made since its inception. Being me, I’m somewhere in the conflicted middle. Further spurning my conflict are headlines like this one from NPR:

“A child born today will never see an American space shuttle blast off from the Kennedy Space Center.” (http://www.npr.org/2011/07/16/137860053/post-shuttle-nasa-to-keep-students-looking-up)

A child born today will not see a lot of things, including Golden Grizzlies in California (the state’s mascot, in spite of its extinction so long ago we no longer realize it is something to be missed), a rotary telephone, or an old-fashioned merry-go-round on a gravel playground. I’ll lament all of these losses, but I didn’t know how to think about the end of the space shuttle program until marking this moment of extinction. It gave me a chance to look back and realize that I was especially aware of the shuttle program from beginning to end. When I was a second grader, I remember that the cover of my school’s yearbook featured an image something like this one: 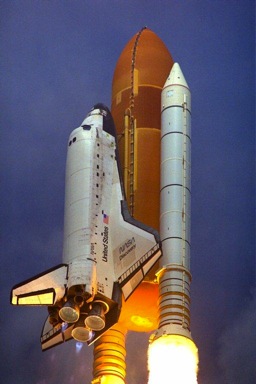 The image I remember was probably of Columbia, marking the inaugural flight of the NASA program. I don’t remember which image it was exactly, but surely it’s the only cover of any yearbook that I have any memory of. I suppose this is because the shuttle and this program captured my imagination; it was the new mode for space travel, and it was just close enough to my image of an X-wing fighter that I embraced its image and its mission — even if I didn’t really understand what it was for.

As I’ve grown older, a bit more insightful if not more mature, I’ve witnessed the program’s celebrations (Hubble Space Telescope’s initiation and subsequent repair) and disasters (I know exactly where I was when the Challenger disaster occurred, and it was the subject of a high school research paper I can still picture the font and spacing of). So, when I think of the NPR headline and the potential impact that the space shuttle program has had on me, I wonder if the end of this chapter in human exploration is also a stab in the heart of science education. What enduring image will today’s second grader have on her yearbook? Perhaps it will be one of a lonely janitor sweeping up the last remaining dustballs of an empty hangar at Cape Canaveral.

But, there are many more images than those of moon landings, shuttle launches, or even Hubble Space Telescope images. There are french fries: 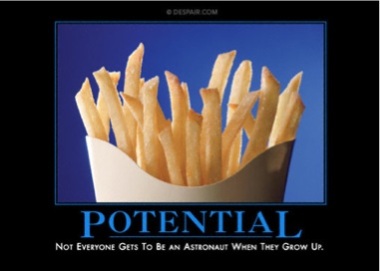 This graphic represented October, I think, on a wall calendar of mine a few years ago. In spite of the fact that it flew in the face of my attitude that science is for everyone and all people have capacity to succeed, it tickled the cynic in me. To make the image that much more indelible, I once had the interaction with a student from someone else’s class when he’d come looking for some help with his physics homework. Sitting down, we stared at a problem that he’d clearly misunderstood and I started to diagnose and prescribe new routes. Without any obvious prompt other than his own frustration, he turned his head and stared up at this image on my wall. His face twisted and his brow wrinkled, and then admitted, “I don’t get it.” I tried to explain, and yet it seemed clear that the author of the image had this very student in mind when the caption was inked.

I giggle when I tell this story, but really it was just an unfortunate intersection of a frustrated physics student with an overly satirical message. I took the photo down later, and replaced it with another that represented university committee work. I had a wide range to choose from.

Here’s where all this leaves me: The imagery of the space shuttle versus the despair associated with asking “do you want fries with that?” is a false choice. There are lots of options in between — my own career path being one of them. In fact, maybe NASA, space shuttles, astronauts, and all that we associate with these things all represent the opposite of what we should be trying to promote to our public, especially our youth. Currently, the options might be presented as “you could be an astronaut,” but without any fallback or intermediate. When was the last time that we created a poster that stated “not everyone gets to be a geologist when he grows up?” Why is a research scientist who tries to understand the scale of nature at the microscopic cellular level not admired as much as those we launch only so far into space that we can still see them — with an unaided eye — when they’re in orbit? Why didn’t any of my yearbook covers have an image of a particle accelerator, a newly discovered arthropod, or a map of the Martian surface? Why had I never even heard of the possibility of medical physics until I was looking into graduate schools?

I think it may be that we don’t know how to represent science, either as a personal endeavor or as a professional pursuit. You can be an astronaut or you can serve fries, we seem to say. So, maybe, just maybe, if we take advantage of this new opportunity, we can push other science to center stage. Not everyone gets to be an astronaut, and that’s a good thing. There is much more to science than jet propulsion and a manifest destiny kind of attitude towards staking claims, a canine-esque marking of our territory. There are so many other extraordinary existences we all have the potential to create for ourselves — especially those which create new understandings that can be shared with all others among us. We should celebrate and promote these.