Stand in the Shadow of the Moon

Imagine a late August morning on the Oregon seashore. Around 10 AM the morning breezes whip your hair around your face. You can hear the crying call of gulls over the relentless crash of waves on the packed sand of the beach. Rocky hills and cliffs rise up to the north and south, giving way to green forests that race eastward toward the seaside town of Lincoln Beach, Oregon.  The water is cold here — the currents flow south along the Oregon coast after skirting the shores of Alaska far to the north; you’re thankful for the warm Sun on your back, drying you off after a brave leap into the chilly water.

Photograph of the 1919 eclipse captured by Sir Arthur Stanley Eddington on an expedition to test general relativity. With the face of the Sun occulted, the outer corona is visible to the naked eye.

But the warm respite provided by the Sun on this morning is soon interrupted, because to the west, beyond the distant horizon, a vast darkness is racing across the Pacific toward you. Around 10:15am, you will experience the darkness  yourself — it will race inland across the Pacific coast, and for 1 minute and 58 seconds, the Sun will vanish, its once brilliant disk replaced by an inky black orb surrounded by ghostly streamers, silently dancing in the sky where moments before you had seen blue skies and that seemingly eternal friend that has warmed and comforted you since childhood. The skies will darken as if night had fallen, the temperature will noticeably drop, and nighttime birds and insects will suddenly become active.  You will be experiencing one of the great spectacles of Nature: a total solar eclipse. But your two minutes of darkness will pass quicker than you can imagine, and the Sun will suddenly appear, as the darkness that you once stood in races eastward toward inland North America.

You will be able to experience this, almost exactly as I’ve described it, on 21 August 2017, when a total solar eclipse crosses the United States from Oregon to South Carolina. It will be the first total solar eclipse visible in the United States since 1979. This is your chance to see what I’ve described, with one notable exception: you will probably be surrounded by thousands of others who have traveled to the centerline to witness this spectacle and stand in the darkness. Never-the-less, it is well worth the experience, and I suggest you start making travel plans now!

What is a total solar eclipse? A total solar eclipse happens when the Moon passes between the Earth and the Sun. When that happens, along a thin path on the Earth, you can see the Sun completely covered by the Moon. For a couple of minutes along the eclipse line, day becomes night — the bright face of the Sun is hidden, making a halo of blazing streamers known as the corona.

A total solar eclipse occurs when the Moon passes between the Earth and Sun. The Moon’s shadow races across the surface of the Earth, blotting out the Sun for those who stand under the racing shadow. [Illustration by S. Larson]

Because the Earth is spinning and the Moon is moving in its orbit, the shadow is moving along, just like your shadow does when you are moving. The combined motion of the Moon in its orbit with the spin of the Earth means the shadow will rocket across the North American continent at 1600 miles per hour. From the moment total shadow first occurs on the Oregon coast (10:15:58am MDT) to the last moment of total darkness on the South Carolina coast (2:49:01pm EDT), only 1 hour 33 minutes and 3 seconds will have elapsed. After that, the event will be all over for those of us rooted to the land.

Track of the 21 Aug 2017 total solar eclipse across North America. The red line is the centerline; anyone standing between the blue lines at the right time will witness the entire Sun being hidden by the Moon. Map from NASA’s eclipse page.

Can you imagine what it was like, hundreds or thousands of years ago, before we had blogs and newspapers and radios to tell us all of upcoming astronomical marvels? The astronomical know-how to predict (and explain!) eclipses has been around for sometime, understood in the Middle Ages by priests and astrologers and in more recent eras by scientists and astronomers. But there was no way (or reason?) to tell anyone what was going to occur. If you and I were peasants in medieval times, we should have been dumbstruck with terror to witness the Sun being eclipsed, yet today we know it is a great marvel and wonder to behold.

The fact that we have such beautiful eclipses on Earth is a matter of complete, cosmic happenstance. It just so happens that the Moon and the Sun appear to be about the same size in the sky, so the Moon can almost perfectly cover the Sun. But this will not always be the case. At some point in the distant future, there will be one last, perfect total solar eclipse, and then none ever again.  There will come a day when there are no more eclipses on planet Earth.

The reason is that the Earth and the Moon are locked together in an inexorable gravitational dance. These two worlds have been locked together almost since the beginning of the solar system. You can see evidence of their sensuous cosmic tango every day. The relatively large size of both bodies, and their proximity, means that each has a profound effect on the other, largely through tides.

Most of us are familiar with the notion of ocean tides — the daily rise and fall of the seas on the Earth’s coasts. These cycles of high and low tides are caused by the effect of the Moon’s gravity on the Earth. The Moon’s gravity pulls on the parts of the oceans that are closest to it, causing a “rise” in the sea, a “tidal bulge” that points toward the Moon. There is a second bulge, on the far side of the Earth, caused by the fact that the strength of the Moon’s gravity grows weaker the farther you are from the Moon. The oceans on the far side of the Earth from the Moon get “left behind” as the Earth and near side oceans are pulled more strongly toward the Moon.

The Earth is constantly rotating, so the interaction of the Earth’s crust with the bulged oceans drags the bulge in the direction the Earth spins, so the bulges don’t point directly at the Moon, rather they point in a direction off to one side of the Moon.

The gravity of the Moon is still pulling on the bulges, so the Moon tries to pull the bulges back in line. Since the Earth is simultaneously trying to move the bulge ahead, the net effect of this gravitational tug-o-war is to slow the spin of the Earth down, ever so slowly (between 15 and 25 millionths of a second every year).

Despite this diminutive change in the Earth’s spin speed, it represents a substantial amount of energy. Where does all that energy go? The only place it can — into the Moon’s orbit. When you dump energy into an orbit, the orbit gets larger. In the case of the Moon, it is getting farther and farther from the Earth every year, at a rate of about 22 mm/yr.

As the Moon gets farther from the Earth, it appears smaller in our sky. Eventually, it will be so small in the sky that it will not be able to cover the Sun, and we will see no more total solar eclipses. At the current rate of 22 mm/yr, the last solar eclipse will happen in about 733,200,000 years.

An annular solar eclipse happens when the Moon is too far away, so it does not appear big enough to cover the entire Sun. [Illustration by S. Larson] 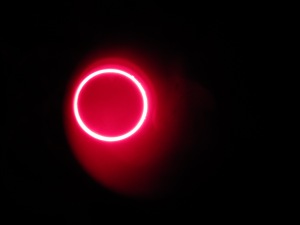 Filtered image of the annular eclipse on 20 May 2012 as seen from Cedar City, Utah. [Image by S. Larson]

While those days are in the very far future, we sometimes get a hint for what they will be like, because the Moon’s orbit is not perfectly circular, so sometimes it is a bit too far away to completely cover the Sun, and we see an “annular eclipse.”  When this happens, the entire Sun is not covered, and the daylight does not fade. To the unaided eye, the Sun appears much like the Sun always does, but through a filtered telescope you can see that The Moon has clearly occulted the Sun — 733 million years in the future, that is all our descendants will ever see.

But that is not your fate — you live in a time when you CAN witness the spectacle of the eclipsed Sun, and you should.  Take a look at NASA’s eclipse page, and start planning where you might go.  But be quick; before too long, hotels are going to start filling up. Look at that — another one just got sucked up in Casper, Wyoming. 🙂

PS: If you for some reason miss this one, you’ll only have another 7 years to wait. There will be another North American solar eclipse on 8 April 2024, running from Texas to Maine. It may not be as easy to get to for most people, but it will be worth the effort. My advice: see the eclipse in 2017, because after your first eclipse you immediately ask, “When is the next one?!“ 🙂  Here is NASA’s page for the April 2024 eclipse.