In Neil Gaiman’s transcendent literary comics series The Sandman,  the Endless are echoes of the patterns of force and existence that define the Universe. Among them is Death, who at the end of our lives, collects us and escorts us from this Universe. As she says to Bernie Capax, who had walked the world for some 15,000 years, “You lived what anybody gets… you got a lifetime.”  (issue 43, contained in the collection “Brief Lives“).

If there is any truth in astronomy that we have learned over the last few centuries, it is that the Universe itself evolves. The stars are born, they live their long lives, and ultimately they perish and decay away. Death waits for them too. The galaxy is littered with the remains of stars that once were. From our vantage point here on Earth, we peer out into the Cosmos and glean what we can with the meager view we have in our telescopes. We have mapped billions of stars, and millions of galaxies. But in the stellar graveyard, we have only seen a handful of objects — we know precious little about the skeletons of the stars, because they simply don’t emit much light.

On 17 August 2017, at 7:41:04 am CDT, a faint whisper from the stellar graveyard washed across the shores of Earth. It showed up first in the LIGO-Virgo gravitational wave network, which was deep in our second observing run (what we call “O2”). At that particular moment, we were all wound up and celebrating because just three days before, we had made our first joint detection with LIGO and Virgo together (a pair of black holes called GW170814). When signals register in our network, the automated software (we call them “pipelines“) generates initial numbers about what the source might be, and that morning we knew we had something special. Our group lead at Northwestern was spinning us all up to start doing computer simulations, and in an early email to us she said what we all knew: this is life changing.

On the first day, we were sending emails that had the inkling already of how important this discovery was.

Why? Because the mass of the objects in the new signal were smaller than anything we had seen in gravitational waves before — all together less than about 3 times the mass of the Sun. Our predisposition from all our years of experience in astronomy said that could mean only one thing: the LIGO-Virgo network had just detected the first binary neutron star merger in history. Today, we call this event GW170817.

Spectrograms show how the frequency of the signal (vertical axis) changes in time (horizontal axis) in each of the three detectors. The long swoop up and to the right is called a chirp. [Image: LIGO-Virgo]

But the story gets better. 1.7 seconds after the gravitational wave signature, the Fermi Gamma-ray Burst Monitor (GBM), in orbit high over the Earth, registered an event — a short gamma-ray burst, now called GRB170817A. This was hugely significant, because we have often speculated about what causes gamma-ray bursts. For short gamma-ray bursts we’ve long thought it must be colliding neutron stars.

What are these neutron stars? They are the dead skeletons of stars, one possible outcome of a colossal stellar explosion known as a supernova. They are extreme objects. They have about one and a half times the mass of the Sun packed inside a sphere about 20 kilometers across (about the size of a city). That means they are extraordinarily dense — a tablespoon of neutron star matter would weigh 10 billion tonnes — about 30 times the mass of all the humans on planet Earth. Gravity on the surface is outrageously strong — about 190 billion times the strength of gravity on the surface of the Earth; if you had the misfortune of falling off a 1 millimeter high cliff, you would be travelling almost 220,000 kilometers per hour when you hit bottom (136,000 mph).

One thing we know about the lives of the stars is that many of them live together with a partner, orbiting one another in a fashion similar to the Earth orbiting the Sun. Like human life partners, one star inevitably reaches the end of its life first, and expires in a supernova. Some such stars become neutron stars. Eventually, the second star in the pair also dies, and if it supernovas, then one end state is two neutron stars, left in an orbital dance with the skeleton of their partner. One might think that is the end of the story for such stars, but there is still one final chapter in this tale from the stellar graveyard. The orbit of the two neutron stars can and will shrink over time through emission of gravitational waves. Of course, we’ve detected gravitational waves before (GW150914, GW151226, GW170104, GW170814), but this time it’s different. Why? We’re talking about neutron stars instead of black holes, which means there can be light, and indeed there was.

The collision of the neutron stars smashes all the matter together, and under such energetic circumstances, matter generates light. The gamma-ray burst was only the beginning. The collision sheds matter into a volume around the merging pair. This matter, suddenly free of the strong nuclear forces involved in the dense matter of the neutron star, recombines and makes heavy elements (physicists call this “r-process nucleosynthesis“). This recombination also creates light, and is called a kilonova. Following the gamma-ray burst there is also a long term afterglow, from the energetic jet of the gamma-ray burst blasting through the surrounding interstellar medium.

The LIGO error ellipses plotted on a skymap of the Hydra-Virgo region. The galaxy NGC 4993 is visible in amateur telescopes. [Image: S. Larson]

Together, the LIGO and Virgo detectors can determine where on the sky a source comes from, though not perfectly. They can point to a region called the gravitational-wave error ellipse. For Gw170817, the ellipse on the sky was narrowed down to just about 30 square degrees — an area about the size and shape of a small banana held out at arms length. The error ellipse spans the boundary between the constellations Hydra and Virgo, with a little tail that stretches into Corvus. This was a difficult position in the sky because at the time of the discovery in mid-August, it sets very shortly after sunset. Never-the-less, telescopes around the world began an intensive imaging search, and just 10.9 hours after the detection of GW170817 and GRB170817A, an optical signal was discovered by the Swope telescope in Chile — a pinpoint of light on the outer fringes of the galaxy NGC 4993 that was not there before. Over the course of the next 10 days, the kilonova faded away; in the end more than 70 observatories worldwide imaged and measured the kilonova.  It has been a historic discovery and observing campaign. This is the beginning of multi-messenger astronomy with gravitational waves.

So what can you do with gravity and light together? As it turns out, an awesome amount of science! Today there is a virtual raft of papers being published (the first wave of many, I expect) outlining what we have learned so far. There are too many to explain them all here, but let me just outline a few that stand out to me.

Probably the most important outcome is the confirmation of the connection between short gamma-ray bursts and binary neutron star mergers. Gamma-ray bursts have been a mystery for more than 40 years. First discovered in the 1960s by the military using satellites meant to monitor nuclear weapon tests, the discovery that they were of cosmic origin was revealed to the scientific community in the 1970s. Since then many ideas and models to explain their origin and intense energy have been explored, but none have been confirmed because the engines — the astrophysical systems that drive them — are far too tiny to resolve in telescopes. The LIGO-Virgo detection of gravitational waves confirms that neutron star binaries are the progenitor of short gamma-ray bursts.

The result that I’m most excited about is we used GW170817 to measure the expansion of the Universe. The expansion of the Universe was first noted by Hubble in 1929, by measuring the distances to other galaxies. This was being done just 5 years after the discovery that there were other galaxies! Fast forward 88 years to 2017 — we’ve measured the expansion of the Universe independently using the distance to a galaxy with gravitational waves and light from telescopic observations together. This measurement comes just two years after the discovery of gravitational waves!  It gives me no small amount of pleasure to echo that historic discovery so close to the beginning of this new era of astronomy. 🙂 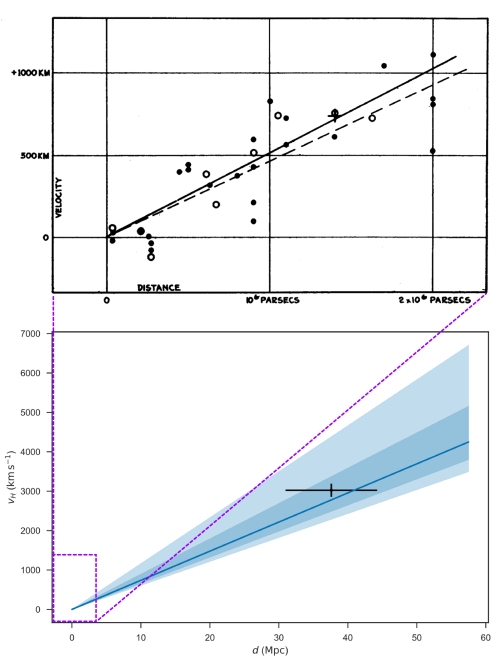 We try and write public accessible versions of our papers in the LIGO-Virgo Collaboration. If you’d like to explore some of the science we’ve been doing, try out some of our science summaries.

The masses of known stellar remnants discovered by both electromagnetic and gravitational wave observations. Between the black holes and the neutron stars is the “mass gap.” [Image: LIGO-Virgo/Frank Elavsky/Northwestern]

So here we are. We are all simultaneously exhilarated, relieved, joyous, and eager for more discoveries to be made. We’re very tired from late nights analyzing data, arguing about results, writing papers, and furiously preparing ways to tell our story to the world.

We could all use a nap. And a pizza.

Because this is only the beginning, the culmination of decades of hard work, difficult hardships, and anticipation. And the best is yet to come. I’m so happy that I’ve seen these days. Being tired doesn’t bother me, all the struggles getting to this point don’t bother me either, because I got to watch it unfold. As Death said, we get what anyone gets; we get a lifetime. These are the moments, the discoveries, that are filling that lifetime up.  Onward to the next one.

This post is the latest in a long series that I’ve written about all the LIGO detections up to now.  You can read those previous posts here:

I have many LIGO and Virgo colleagues who also blog about these kinds of things. You may enjoy some of their posts too!