I just returned from the 33rd annual Winter Star Party, hosted by Miami’s venerable Southern Cross Astronomical Society. Every February, for a week during the new moon, 400 amateur astronomers and their families descend on Camp Wesumkee in the Florida Keys.  During the idyllic days, we sit in lawn chairs, enjoy the gentle sea breezes, watch sandpipers running along the tideline, or beachcomb on the key front looking for pretty shells or little fishies trapped in tidepools.

But the real reason we are there becomes apparent as the Sun sinks over the western sea, and the black velvet of night emerges, studded by brilliant diamonds of light. The vast majority of us live our lives under the glaring lights of modern cities, and all too often we forget that the Cosmos is there, hiding behind our artificial fluorescent glow, waiting for us to remember. At the first sunset of the Winter Star Party, it all comes roaring back and you remember what you’ve been missing.

The Milky Way rises over Scout Key around 3am in February. You can watch a timelapse movie of the whole night, including the rising of the Milky Way, on YouTube. [Image: S. Larson]

People often ask me, “are you religious?” My answer is that I am not in the sense of modern churches and institutions, but I do know that we are part of something larger — a Cosmos infinitely vast and wonderful and intricate beyond anything we can imagine or will ever know. The cathedral of night is my church.

In his poem “When I Heard the Learn’d Astronomer,” Walt Whitman espoused the idea that you don’t need sages to know a deep connection to the sky, only the solitude of the night.

But in today’s fast paced world, driven by small screens, instant communication, and more information than has ever been gathered by a civilization before, it is hard to slow down enough to realize those moments of solitude. Living beneath the glare of our cities, there are generations of people who have never truly seen a starry sky and thus never built a deep personal connection to the night. 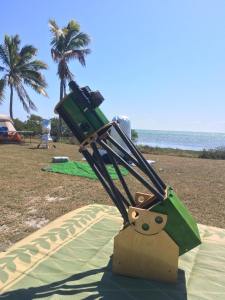 While the Winter Star Party is dominated by amateur astronomers who, like me, do this as often as we can, there are also a lot of people who are experiencing the dark night sky and the Milky Way for the first time. They walk among the telescopes at night, peering at a nebula here or a star cluster there, all the while being regaled with tales and facts of all that we have learned from 400 years of telescopic study of the sky.

This year, at around 4 in the morning, the Milky Way climbed up above the horizon, it’s center studded by a pale yellow “star.”  A young couple, at their very first star party, had stopped by my telescope for some quiet conversation and some views of the sky.

“Do you want to see something cool?” I swung my telescope over to the pale yellow “star” and let them peer through the eyepiece. The view elicited startled gasps, and loud exclamations of joy.

View of Saturn through the telescope, taken with an iPhone [Image by Andrew Symes; visit his blog here]

“There is no way that is real!”  The pale yellow “star” was in fact not a star at all — it was the planet Saturn, a cream colored orb bejeweled by its famous ring, the ring itself narrowly divided by a thin black gap known as the “Cassini Division.”

Delivering a personal experience with the night sky is part of the promise of amateur astronomy. We show people the Moon, stars, clusters, perhaps an occasional galaxy. But nothing moves people like their first view of Saturn through a telescope. Most people who take the time to look walk away remembering that moment for the rest of their lives.

We call this “the Saturn Moment.”

More than any other far away object in the sky, Saturn looks like what people expect. They often respond to their view with incredulity, joking that it looks almost painted, or like a picture that has been taped over the end of the telescope.

The Moon often engenders similar responses, but people expect the Moon to look that way. They can see it with their eyes, and imagine craters and mountains, so they aren’t necessarily surprised by the telescopic view.

By contrast, most people have never seen Saturn, except through the eyes of space probes. The telescope somehow takes the NASA pictures we see on our computer screens, and makes it real and visceral.

At the Adler Planetarium in Chicago, you can see a “20 foot Refractor” similar to the kind used in Huygens time (left). We have it set up so you can look through it, and see the same kind of fuzzy image of Saturn he may have seen (right). [Images: S. Larson]

The first person to have a Saturn Moment was Galileo, who turned his telescope on the skies in 1609. His views of Saturn were not the greatest, as his sketches published a year later in Sidereus Nuncius show. It was clear Saturn wasn’t normal because he could make out blobs on either side. He wrote in a letter to his student Benedetto Castelli that Saturn had “ears.” It wasn’t until 1655 that Dutch astronomer Chrstiaan Huygens, using a much better telescope (though still fuzzy) was able to discern that Saturn was surrounded by a thin, flat ring.

A 57 mm diameter lens, all that remains of the telescope Huygens used to observe Saturn. Around the edge is carved a verse from the Roman poet Ovid: “Admovere Oculis Distantia Sidera Nostris” (They brought the distant stars closer to our eyes). It is an anagram, establishing the details of Huygens’ discovery of Saturn’s moon, Titan. When translated, it reads “A moon revolves around Saturn in 16 days and 4 hours.”[Image: Utrecht Univ. Museum, from APOD]

Today, ordinary people like you and me can own telescopes that would have made Galileo and Huygens swoon with envy. Technology is better, and available to everyone.

My Saturn Moment happened long ago, at a sidewalk astronomy event. An amateur astronomer invited me over to look through her “telescope” — it wasn’t an ordinary telescope, it was a spotting scope for birding that she had pointed at the sky. But what I saw blew my socks off. I was seeing Saturn, with my own eyes, and I could see the rings! Though I don’t remember it, I’m sure the rusty dot of Titan, Saturn’s largest moon, was also lurking nearby.

The ultimate result of that encounter is that today my wife and I are both amateur astronomers ourselves, and we guide people through their own Saturn Moments every year. Each moment is unique, exhilarating, and moving in their own way. Among the most memorable was several years ago, my wife had guided a young boy to our telescope to have a peek at Saturn. The view elicited a loud gasp, and the exclamation, “It looks just like a Chevy symbol!” Yep, it kind of does!

If you’ve never seen Saturn before, go to your local planetarium or astronomy club. They would love to show you Saturn for the first time. And when you’re done, tell everyone what you’ve seen, and encourage them to have their own, first #SaturnMoment, a moment of perfect beauty between us and the Cosmos.

4 responses to “The Saturn Moment”