Today would have been Carl Sagan’s 82th birthday. It is an auspicious year, because after a 108 year drought, the Chicago Cubs have won a World Series title. The Cubs win reminded me of Sagan because his son, Nick, had told a story once of introducing his dad to computer baseball based on statistics, whereby you could pit famous teams in history against one another. Sagan apparently said to Nick, “Never show me this again; I like it too much.”

Today, Carl Sagan would have been 82 years old.

It is an instantly recognizable feeling to those of us who do science — a nearly uncontrollable urge to ask, “What if…” and then construct an experiment to answer that question. When faced with the prospect of being able to pit two great teams from baseball history against each other, the little science muse in the back of your mind begins to ask, who would win? What if I changed up the pitchers? Does the batting order matter? What if they played at home instead of away?

This incessant wondering is the genesis of all the knowledge that our species has accumulated and labeled “science.”  And so, to commemorate Sagan’s birthday, and the Cubs win this season, I’d like to look back at what we knew of the world the last time the Cubs won the World Series, 108 years ago, a time well within the possible span of a human life.  The year is 1908…

In 1908, a young physicist named Albert Einstein, 3 years out from his college degree and after a multi-year stint working as a clerk in the Swiss Patent Office, got his first job as a professor, at the University of Bern. This era was a time in the history of physics where scientists were trying to understand the fundamental structure of matter. Einstein’s PhD thesis was titled, “A New Determination of Molecular Dimensions.” Despite the fact that he could not find a job as a faculty member in the years after he graduated, Einstein worked dutifully at the Patent Office, and did physics “in his spare time.” During 1905, he wrote a handful of transformative papers that would change physics forever. Like his PhD work, some of those were about the invisible structure of matter on the tiniest scales. One explained an interaction between light and matter known as the “photoelectric effect,” which would be the work for which he would win the Nobel Prize in 1921. Physicists had for sometime known that some materials, when you shone a light on them, generated electric current. Einstein was the first person to be able to explain the effect by treating light as if it were little baseballs (Go, Cubs! Go!) that were colliding with electrons and knocking them off of the material. Today we use that technology for devices like infrared remote controls to turn your TV on and off!  By the time Einstein became a professor, he was thinking about new and different things that had caught his attention, sorting out some new ideas about gravity that would, after an additional seven years of work become known as General Relativity. 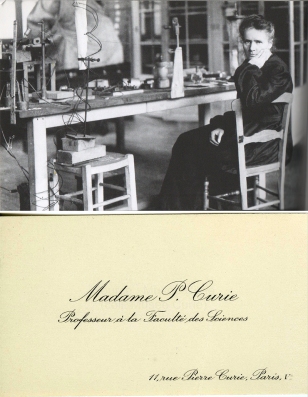 Other physicists were hard at work exploring other aspects of the properties of matter. In 1908, already having earned her first Nobel Prize (in 1903), Marie Curie became the first female professor ever at the Sorbonne in Paris. Her 1903 Nobel Prize in physics was for her work in the characterization of radioactive materials. She and her collaborators were not only trying to understand the nature of radiation and the properties of radioactive materials, but were discovering many of them for the first time. Today, we look at a periodic table of the elements and there are no gaps, but in 1908 there were. Curie and her colleagues discovered radium and polonium. They also discovered that some previously known elements, like thorium, were radioactive and we hadn’t known it. Before this pioneering work, the world knew nothing of radioactivity. At this time, the dangers of radiation were unknown. Curie for years exposed herself to radiation from samples in her laboratory; today, many of her notebooks are still too radioactive to be handled safely without protective equipment. In 1934, Curie died of aplastic anemia, a blood disease brought on by radiation exposure whereby your body cannot make mature blood cells.

We think a great deal of Curie’s exposure to radiation came not just from carrying radioactive samples around in her pockets (something that today we know is a bad idea), but also exposure from a new technology that she was a proponent of: medical x-rays. During World War I she developed, built, and fielded mobile x-ray units to be used by medical professionals in field hospitals. These units became known as petites Curies (“Little Curies”).

There were other technological advances being introduced to the world in 1908.  That year, the world was still becoming acquainted with the notion of flying machines. The Wright Brothers had successfully demonstrated a powered flying machine at Kitty Hawk in 1903, but in May of 1908, for the first time ever, a passenger was carried aloft when Charlie Furnas flew with Wilbur Wright over the Kill Devil Hills in North Carolina. Just as with Curie, the Wrights were in unexplored territory, learning about the art and science of flying for the first time. Dangers and unexpected events abounded — the Wright Flyer experienced a crash late in 1908 after a propellor broke during a demonstration for the military at Fort Myer. Orville Wright was seriously injured, but his passenger, Lieutenant Thomas Selfridge, sustained a serious skull injury and died 3 hours after the crash: the first person to perish in the crash of a self-powered aircraft.

On the opposite coast of the United States, also in 1908, the largest telescope in the world was completed on Mount Wilson, outside of Los Angeles: the 60-inch Reflector, built by George Ellery Hale. The 60-inch was built in an era when astronomers had discovered that building bigger and bigger telescopes enabled them to see deeper into the Cosmos in an effort to understand the size and shape of the Universe and our place within it. One of the biggest discoveries made with the 60-inch was still ten years away — astronomer Harlow Shapley would use the great machine to measure the distances to globular clusters near the Milky Way and discover that the Sun did not lie at the center of the galaxy(see Shapley’s paper here); today we know the Sun orbits the Milky Way some 25,000 light yeas away from the center.

The nature of the Milky Way was still, at that time, a matter of intense debate among astronomers. Some thought the Milky Way was the entire Universe. Others argued that some of the fuzzy nebulae that could be seen with telescopes were in fact “island universes” — distant galaxies not unlike the Milky Way itself.  The problem was there was no good way to measure distances. But 1908 saw a breakthrough that would give astronomers the ability to measure vast distances across the Cosmos when astronomer Henrietta Swan Leavitt published her observation that there was a pattern in how some stars changed their brightness. These were the first Cepheid variables, and by 1912 Leavitt had shown how to measure the distance to them by simply observing how bright they appeared in a telescope. A decade and a half later, in 1924, Edwin Hubble would use Leavitt’s discovery to measure the distance to the Andromeda Nebula (M31), clearly demonstrating that the Universe was far larger than astronomers had ever imagined and that the Milky Way was not, in fact, the only galaxy in the Cosmos. By the end of the 1920’s, Hubble and Milton Humason would use Leavitt’s discovery to demonstrate the expansion of the Universe, the first hint of what is today known as Big Bang Cosmology.

(L) Leavitt at her desk in the Harvard College Observatory. (R) The Magellanic Clouds, which Leavitt’s initial work was based on, framed between telescopes at the Parnal Observatory in Chile. [Images: Wikimedia Commons]

Today, it is 108 years later. When I reflect on these items of historical note, I am struck by two things. First, it is almost stupefying how quickly our understanding of the workings of the world has evolved. It really wasn’t that long ago — barely more than the common span of a human life — that we didn’t know how to fly and we didn’t know that the Cosmos was ginormous beyond imagining. The pace of discovery continues to this day, dizzying and almost impossible to keep up with. The second thing that is amazing to me is how quickly we disperse and integrate new discoveries into the collective memory of our society. Flying is no longer a novelty; it is almost as common and going out and getting in a car. Large reflecting telescopes capable of making scientific measurements are in the hands of ordinary citizens like you and me, gathering starlight every night in backyards around the world. Most people know that the Milky Way is not the only galaxy in the Cosmos, and that radioactive materials should not be carried around in your pocket.

It is a testament to our ability to collect and disperse knowledge to all the far flung corners of our planet and civilization. In a world faced by daunting challenges, in a society in a tumultuous struggle to rise above its own darker tendencies, it is a great encouragement to me that the fruits of our knowledge and intellect are so readily shared and accessible. When the challenges facing the world seem to me too daunting to overcome, I often retreat to listen to Carl’s sonorous and poetic view of our history and destiny (perhaps most remarkably captured in his musings on the Pale Blue Dot). He was well aware of the problems we faced, but always seems to me to promote a never ending optimism that we have the power to save ourselves– through the gentle and courageous application of intellect tempered with compassion.  It seems today to be a good message.