One of the great pleasures in my life is that I am both a professional as well as an amateur astronomer. I spend my days, like many of us do, behind a computer keyboard, staring at a computer screen. I get to think about things that are cool, like black holes and the death spiral of binary stars, and whether or not we can hear the faint whispers of gravity washing over us from some unimaginably distant cosmic shore.

There is nothing quite like standing out in the dark and seeing the Cosmos with your own eyes. [Grand Tetons, by Royce Bair; http://NightScapePhotos.com/ ]

But when I go home, I like to spend long hours of the night out under the stars, in deep personal communion with the Cosmos. Stand out in your backyard, or in a dark mountain meadow, and look up. The sky is deep and vast, studded by thousands of stars, tantalizing bright and inviting, but inexorably far away. If you’re lucky, you can see the Milky Way striking up from the horizon, soaring overhead into the velvet darkness, holding the sky up over your head. I find it deeply comforting to lose myself in that view, to let the Cosmos envelop me in its embrace; some part of me knows “this is home.”

The deep connectedness we often feel with the Cosmos is tempered by another realization: that we are small in the face of the vastness of the Universe. It is an ephemeral and unsettling feeling that is hard to explain and vocalize, but in the opening scene of Cosmos, Carl Sagan captured it perfectly, writing

Beyond ordinary human understanding. We can quantify the scale and age and makeup of the Cosmos, but most of the numbers we are forced to use are big — crazy big! Well outside the boundaries of our everyday experience. Numbers so far outside our everyday experience that to simply state them is almost meaningless, because when we hear them said aloud, our brains fail to process what we are really saying (or hearing). Saying and hearing the numbers fails to adequately capture what we instinctively know, but can lyrically convey one person to another with words that are poetic, but somehow deeply meaningful: somewhere between immensity and eternity.

Our understanding of the vastness of the Cosmos starts not by looking outward, but rather by looking inward. This photograph is one of the most iconic images of the Space Age, known as “The Blue Marble.” There have been many versions, updated every few years as new and better images become available. It looks, for all the world like a child’s blue, glass marble.

There are very few people who, when presented with this photograph, don’t recognize it as the Earth. But here is something to consider: to actually see the entire Earth at once, as it is presented in this picture, you have to be tens of thousands of kilometers away. In all the history of our species, there have only ever been 24 people who have seen the world this way: the Apollo astronauts who made the voyage to the Moon and back.  The rest of us have only become familiar with this image of our small, fragile world though their words, their memories, their pictures. Since that time, now approaching 50 years in the past, the picture has been updated and refined, not by human eyes, but through the lenses and electronics of robotic emissaries, cast out into the night to make voyages that we humans seldom seriously pursue.

The most common and fastest modes of transportation most of us will ever encounter.

This small, blue world is the starting point for all our voyages into the Cosmos, whether they be on ships adapted to the abyss of space, or on wings of thought, unfettered by physical separations in time and space. One way to think about the size of the Cosmos is to imagine making a voyage of exploration. In the stack of notebooks on my desk is one non-descript composition notebook marked “Destinations.” It contains within its leaves lists and notes of destinations on Earth that, given time and freedom, I would love to visit. Kind of my own personal Atlas Obscura.  Many of those destinations can be reached using an automobile, the transport du juor for most of the modern world. Most of us have been in an automobile, and have traveled regularly at a speed of say 100 kilometers per hour (about 60 miles per hour).  By contrast, many of the other destinations can only be reached using the air travel network that girdles our world, travelling by jet aircraft at about 900 kilometers per hour (about 550 miles per hour). Few of us have had the opportunity to travel faster, in a military jet or by rocket.

British astronomer, Fred Hoyle, once remarked “Space isn’t remote at all. It’s only an hour’s drive away… if your car could go straight upwards!” He’s right — the boundary of the Earth’s life-sustaining atmosphere is not that far over our heads. If our cars could drive straight up, we would be off on an epic, Cosmic road trip unlike any other before. Let’s consider a few interesting mileposts, and what their entries might look like in my Destinations notebook. My roadtrip car of choice: a Yugo.

Consider Earth orbit — the first stop on the way to anywhere beyond the Earth. For your spaceworthy Yugo, the journey up will be a few hours, and only 23 minutes at the speeds of a passenger jet. By contrast, it took the space shuttle just under 10 minutes to reach orbit.

The Moon was 4 days away if you travelled on Apollo; to drive your car would take 5.4 months of non-stop driving, and just over 17 days by jet. Here, we begin to get the inkling of why exploring the Cosmos is hard — at the speeds of everyday life, even the closest destinations are far away.

Spacecraft take 6-12 months to reach Mars by rocket. Driving in your car would take more than 106 years — longer than a human lifetime. If you left for Mars in a jet when you entered first grade, you’d make it just in time to have your high school graduation on the Red Planet.

Pluto has long been the outermost sentinel of the small neighborhood we call home. The New Horizons spacecraft has taken 9 years to fly there, and as of the time of this writing is less than 2 weeks away from its flyby encounter. If the ancient Egyptians had left for Pluto in a spacefaring Yugo, they still would not have arrived— the voyage by car takes almost 7000 years to complete; the voyage by jet takes 740 years.

Beyond the boundaries of the solar system, voyages by ordinary means can be computed, but they become utterly meaningless in terms of timescales. The center of the Milky Way is 26,000 lightyears away, which would take 31 billion years to reach at the speeds of a passenger jet — more than twice the age of the known Universe. The Andromeda Galaxy, the nearest spiral galaxy to the Milky Way, is 2.5 million lightyears away, but it would take us 3 trillion years to reach via jet.

We can compute these times, we can say these words, but our eyes glaze over and we let the words for the immensity of the Cosmos slip by us with little regard for what they really mean. The size of the Cosmos is beyond ordinary human understanding.

The Hubble Space Telescope. Arguably the most capable and successful telescope ever built by humankind.

Despite the fact that we can’t voyage across the Cosmos, we can look. The most capable and accomplished telescope the human race has ever built is the Hubble Space Telescope. In its 25 year lifetime, it has seen farther than any telescope before, with tens of thousands of scientific papers published using its data. One of the most remarkable tasks we set before it was the creation of “deep fields.”

Consider the evening skies, shortly after 9pm in January. The constellation of Orion, the Hunter, lies just to the east of the meridian (an imaginary line, running from due north to due south in the sky). Striking out from his western knee is the long and sinuous constellation of Eridanus, the Great Sky River, that winds and wends its way around a non-descript constellation known as Fornax, the Furnace.

Location of the Hubble Extreme Deep Field, between Eridanus and Fornax.

Between Fornax and one of the bends of Eridanus there is a small, blank patch of sky. Like many patches of the sky, there is nothing there visible to the naked eye. Even far from the city lights, if you stare into the void there, you will see little. To make a Deep Field, we take Hubble, the most storied telescope in history, and stare at one empty spot in the sky. For many days on end. In the case of this lonely spot on the banks of Eridanus, Hubble stared for 23 days.  The result is one of the most startling and revelatory pictures taken in human history.  It is called the Hubble Extreme Deep Field (XDF; NASA page here). 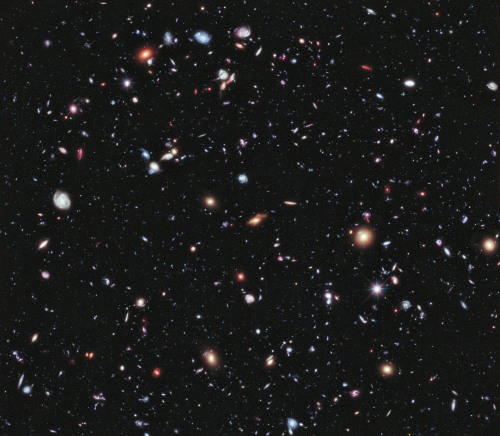 As you can see, the blank patch of sky is not so blank after all. Every fleck of light, every smear of something in this picture is a distant galaxy, a remote shoal of stars and planets and gas and dust, and just maybe, other intelligent beings staring up at the sky.  All told, in this single image, there are about 5500 individual galaxies. The faintest are 10 billion times too faint to be seen with the naked eye; it took Hubble, the most powerful telescope we’ve ever built, 23 days to see them.

And what have we learned from this picture of the Cosmos? All told, there may be as many as 500 billion galaxies in the entire known Universe. We know that the Universe is 13.7 billion years old, but the oldest galaxies we’ve seen formed soon after the birth of the Cosmos, about 13.2 billion years ago. Big numbers, huge numbers. Numbers beyond ordinary human understanding.

The Cosmos is ginormous (that’s a technical term). It is easy to be overwhelmed when faced with the enormity of it all. But you should also take heart. One of the most remarkable things about the Cosmos, one of the most remarkable things about our species, is that we can figure it out. Despite the size and vastness we have managed to see and understand remarkable and astonishing things about our home, and are capable of pondering the implications of our existence in the Universe. Next time, we’ll explore some of those discoveries and ponderings.

This post is the first in a series of three that capture the discussion in a talk I had the great pleasure of giving for Illinois Humanities as part of their Elective Studies series, a program that seeks to mix artists with people far outside their normal community, to stimulate discussion and new ideas for everyone.

Illinois Humanities taped this talk and you can watch it online;  many thanks to David Thomas for doing the videography!

9 responses to “Feeling Small in a Big Cosmos 01: Vastness”